My last posting introduced you to the 1981 version of my Needles Division.  The FP45's are a perfect example of the time frame choice, June, 1981.  In the months following, the FP45's would be rebuilt and the appearance would change with the addition of smoke deflectors on the roof.  A very unsightly addition in my opinion.  In 1980, FP45 #5943 was rebuilt as a prototype for future remanufacturing of this class.  However, at that time, the smoke deflectors had not been added.  (I modeled this rebuild, and you will see it in a future posting.)  After much research, the following FP45's are weathered as they might have looked prior to their rebuilds in '81 snd '82.

What are the chances that four F units would be in one train?  Well, in 1985, I photographed four F units together westbound in Cajon Pass, and a B&W photo of this scene made it into CTC  Board magazine in April of  '85.

A video of this train can be seen on YouTube at: 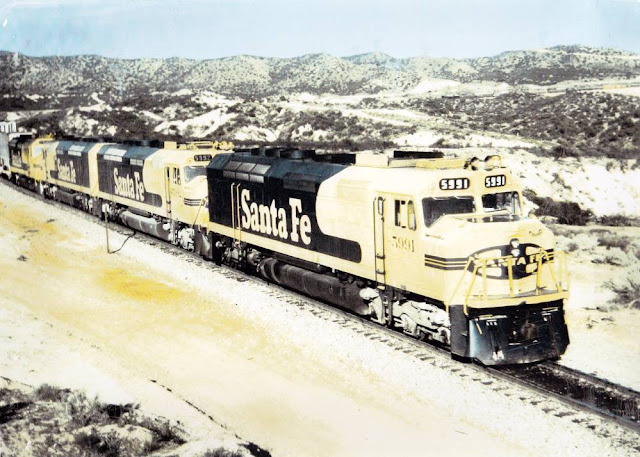