Today the Needles Division goes back in time to the transition era of railroading.  Most railroads were in the middle of converting from steam to diesel power, and facing a severe decline in passenger service, due to competition from autos and planes.  Over the next several months, I will try to show you how the Santa Fe Railroad may have looked in year 1954, as it tried to keep passenger trains as well as freight trains, loaded and running on time.


Due to reduced passenger volume in the early 50's, the Chief was now required to add chair cars to the sleeper cars the train had historically carried exclusively.  Transcontinental traffic (from Washington, Baltimore and New York) was transferred to the Super Chief.  The Chief ran in this basic format until the late fifties when high level cars replaced most equipment. The Chief  ran from Chicago to Los Angeles, and vice versa.


The equipment varied with each season, but a 1954 Chief would look something like this:

The Chief was powered mostly by EMD F7's or upgraded F3's, in an ABBA arrangement.  This provided 6000 horsepower for the14-18 car train.  Kato models.

The first car following the baggage cars is the Pullman built Baggage Dorm Lounge, no. 3479.  This is the only car in the consist with the vestibule in the rear, for accessibility to the lounge by coach passengers.  The dormitory section was for the crew.  Remember, some of the crew servicing the passengers remained with the train for much of the trip.  The BDL is from M&R sides on a American Limited frame, the four chair cars are from Kato.

﻿
Following the 3-5 chair cars would be the lunch counter diner, number 1505.  Santa Fe was one of the few railroads employing the LCD.  This Budd car was built especially for the Santa Fe and primarily designed for use by coach passengers.  The model is from Pecos River Brass, with scratch built interior. 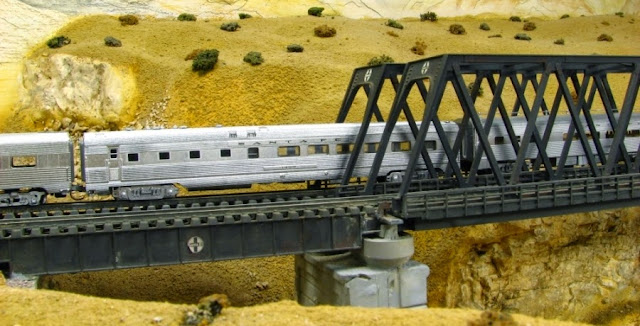 The Budd diner, number 1490, followed the LCD as it was primarily designed for the sleeper car passengers, the sleepers being in the rear of the train.  The model is from Kato with four kitchen windows added by the author.

Following the diner you find the bar lounge car, the Pullman made 1345.  This is where those passengers in private rooms can mingle with the other passengers and have a refreshing drink.  A car of this type is necessary for cross country travel.  The car is made with the M&R/American Lmtd. combo.  The 10-6* Sleeper "Palm Top" is from Pullman and is a Kato model from the Super Chief set.

The second of five sleeper cars is the popular 4-4-2* "Mojave" manufactured by Pullman Car Co. in 1938 for the Super Chief.  The model is the mating of M&R car sides with American Limited sub frame and trucks, with Kato wheel sets.

The final two cars are an 8-2-1* Budd sleeper "Isleta" built for the 1937 Super Chief and the Pullman 4-1* sleeper "Puye" built in 1938.  The Isleta is from the Oriental Limited 1938 Super Chief brass release from many years ago.  The Puye is a Bedroom Lounge Observation.  A modified Atlas car, it is a  model release from the 1970's (still available today!).