Beginning in 1915, The Santa Fe Railroad daily ran express freight trains, Nos. 7 westbound and 8 eastbound between Los Angeles and Chicago. These trains were routed on a passenger schedule.  The railroad also had a contract with the government to handle all mail within its territory, no matter how much.  The same went for express freight.  The railroad had to provide transportation for various sized carloads.  Santa Fe also handled various express cars from other railroads, as well as their own RPO's and mail cars.  Thus, no two trains were alike.

Today's #7 Fast Mail is led by EMD F3 ABBA #16, which have been upgraded to F7 specifications.  Total horsepower is 6000. (The video has F7's leading). The models are Kato first generation units, upgraded with Phase III frames and motors (for quieter and smoother running).  They also feature "Farr" stainless steel grilles from JnJ trains. 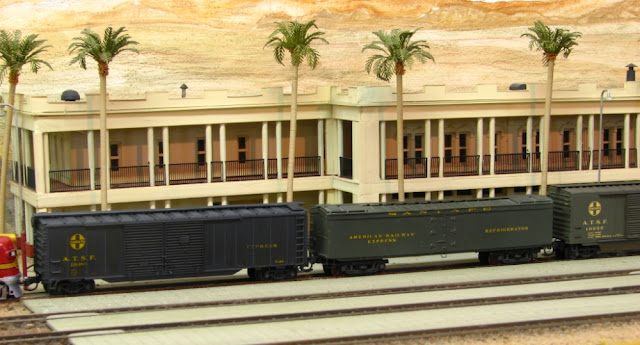 Santa Fe owned ONE of these cars, an upgraded truss rod, wood sided car, with steel plates covering areas where there were once windows.  A major rebuild if ever there was one.  Atlas chose to manufacture these cars in quantity in N Scale! (I, of course, have several.)

Custom built from M&R sides, ATSF 1982 represents one of many horse express cars used to transfer race horses from tracks throughout the country.  Painted grey with silver lettering.  One of my favorite cars on the Needles Division.

Heavyweight RPO 65 is a Pecos River Brass model produced some 30? years ago.  Custom painted.  Found on Ebay in the nineties, I paid a premium price for my four RPO's and was glad to do it.  I modified the trucks for smooth operation. Very rare car. 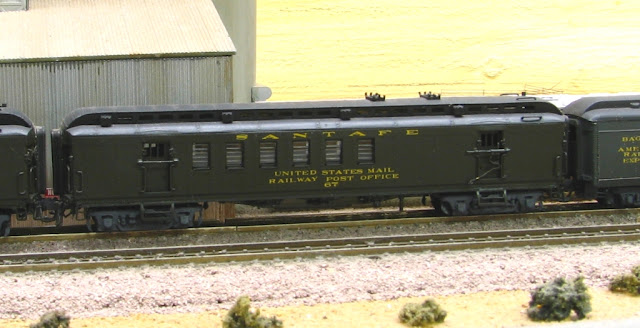 The prototype was manufactured in 1924, with two 4-wheeel trucks covering a 60' 8 1/2"' length. These two cars are true Railway Post Offices, authorized by the Federal Government. 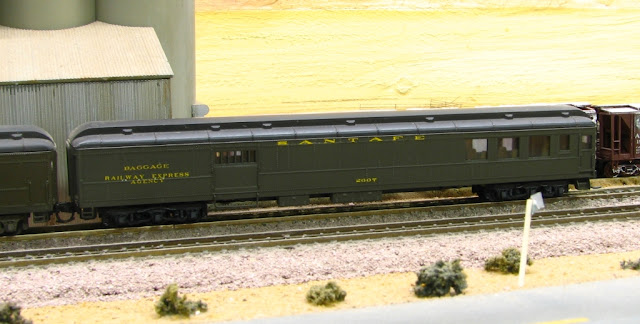 By law, a rider car was needed for any passenger traffic.  The prototype combines 2602-2608 were converted from Buffet-Library cars between 1937 and 1940 specifically for the Fast Mail Express.

You can view a video of this train on YouTube at: