The San Francisco Chief began operations in June of 1954, designed to compete with City of San Francisco (UP and CNW) and the California Zephyr (Burlington, RG, and WP).  This was the last long distance new train service introduced in America, but not with new equipment.  It was a success from the beginning, running from Chicago to Richmond, CA, just outside of San Francisco.

Here at Barstow, we see the San Francisco Chief heading eastbound led by an ABA lashup of of PA locos. 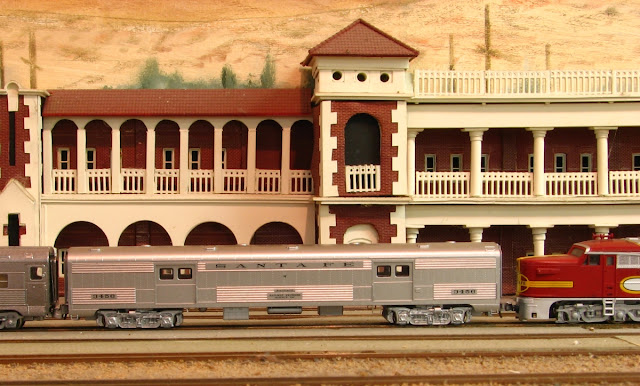 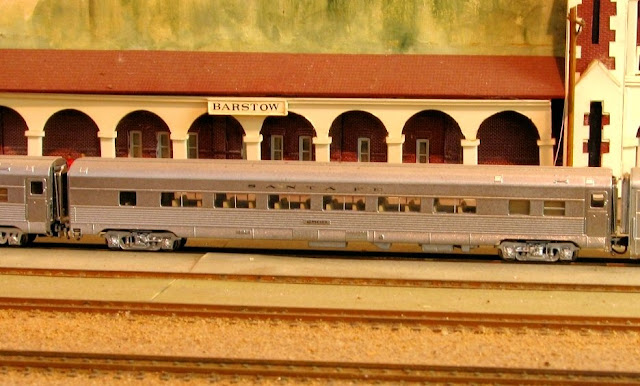 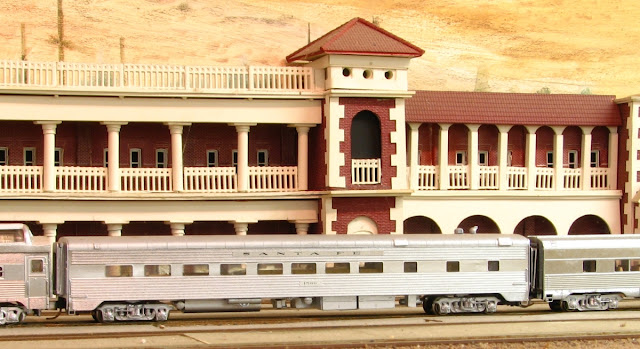 Following the chair cars, comes the 1566 Lunch Counter-Diner.  The prototype was manufactured by Pullman Car Company in 1950. I made this model from M&R brass sides on an American Limited chassis, with Kato wheel sets.

This is the reverse side of the LCD.  It has a very interesting window arrangement.  The kitchen is on the left side of the photo.

The Big Dome Lounge Dormitory cars were delivered in early 1954.  Because of the dormitory, the lounge was smaller than the lounge of the Big Dome cars on the El Capitan.  Thus an additional lounge car was added to the SF Chief, after the diner. This car was kit bashed from M&R sides on a Bachman chassis.

The Bar Lounge 1348 is a Pullman manufactured car from 1947.  Again, M&R sides on American limited chassis.

The Regal Arms is and American Car and Foundry manufactured 4-4-2.  These cars were manufactured for the Super Chief, but many found there way to other streamliners.  This is the first of the sleepler cars.  The model is from Kato.

Pine Leaf is a 10-6 sleeper from Budd.  I removed much of the skirting, as in reality, crews removed them for greater access to the equipment.  The model is is from Kato.

Indian Arrow is a 24 Roomette car from Pullman. I built this car from M&R sides on an American Limited chassis with Kato with Kato wheelsets.

Blue Moon is another M&R car.  This sleeper would be dropped off in Arizona with its ultimate destination being Phoenix.  There were many sleeper pick ups and drop offs along the way to and from Chicago.  I included this car FYI.

The last car in the streamliner is the Salahkai 8-2-2 sleeper.  The Salahkai was built by Pullman from a 1937 order.  Another M&R sides car.

Thanks for your interest.

A video of this train can be found on YouTube at: